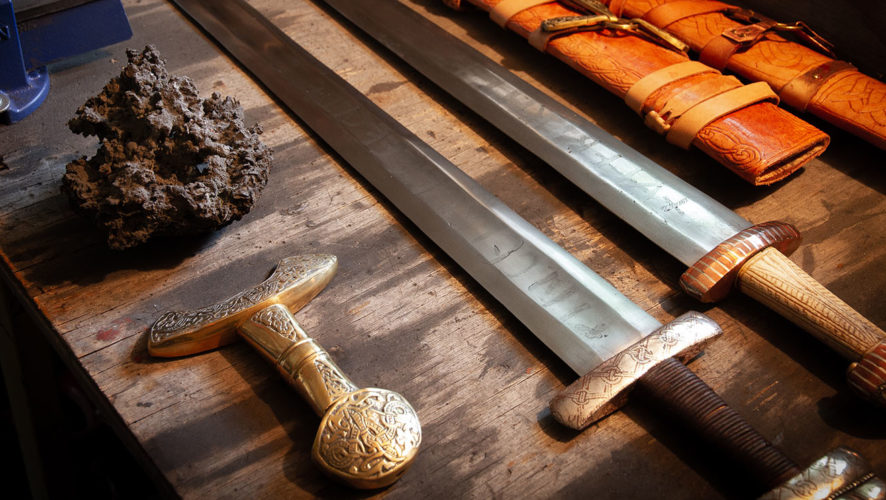 Mikko Moilanen is a Finnish blacksmith, archaeologist, and Doctor of Philosophy who forges Viking Age swords in the same way as blacksmiths did over a thousand years ago. The traditional craft and theory of ancient metalworking have largely disappeared across Europe. Moilanen has learned these skills as a journeyman and forged his first sword already at the age of 12.

When Mikko Moilanen studied archeology at the University of Turku, his lecturer was asked who could reconstruct a Viking Age sword. The lecturer knew Moilanen’s background as a blacksmith and proposed him for the project. Moilanen noticed that no one had replicated the techniques required for making the sword, and has been learning ancient blacksmithing techniques ever since.

The Viking Age took place in Scandinavia between 800 and 1050 AD. The Vikings are especially known for their conquests and looting, but they were also merchants, explorers, and settlers. The Vikings also developed ship technology, which opened the door to long-distance trade and sailing even across the Atlantic Ocean.

For the Vikings, the sword was one of the most important and valuable items, a respected and feared weapon of war. A good sword was battle-worthy, durable, and sharp. The swords were believed to have supernatural qualities and they were beautifully decorated with runes and patterns. When a Viking died, the sword was buried with its owner but the blade was bent to render it useless. This way the sword could no longer be used as a weapon against the living.

Blacksmiths were highly regarded for making and repairing weapons and many other necessities and tools. The Viking Age village blacksmiths have been experts of their time in metallurgy and welding.

Many Viking Age swords have been found in Finland. Based on these findings, Moilanen reconstructs the swords with production methods that have been passed down for 1,000 to 1,500 years as an oral tradition. Moilanen has learned the methods of forging swords by experimenting.

In the Viking Age, the sword forging process began by producing pig iron. In Scandinavia, iron was made by reducing iron ore extracted from marshes and lakes. First, the ore had to be heated on an open fire to remove impurities and moisture. The crushed ore was then reduced in a furnace, which may have been an earth pit lined with clay and rocks. The reduction phase took approximately one day. As a result of the reduction, pig iron was formed at the bottom of the furnace. The iron produced this way was of uneven quality and contained a lot of impurities and slag. The carbon content could vary greatly in different parts of the iron piece.

When the iron was processed, its carbon content dropped. The blacksmiths aimed to increase the carbon content, which would make the tempering of the sword more successful. However, adding carbon to the steel was laborious and difficult.

In reconstructions, Moilanen strives to use as similar steel as possible to the steel used in the Viking era. He collects, for example, the skids of old carts and sleighs. Non-alloyed, low-carbon steel is difficult to obtain nowadays, and its price is high due to low demand. The alloying elements in the new industrial steels make them resilient.

From a piece of steel to a sword

After reduction, the glowing piece of iron was lifted from the furnace to be forged, for example, on a large stone. When heated, the steel is flexible and moldable. The purpose of forging was to remove impurities and slag from the iron. As the piece cooled, it was reheated in the furnace. The forging phase lasted an entire day and involved heavy physical work. The blacksmith’s skills included knowing the temperature of the workpiece based on the color of the glowing iron.

The swords of the Viking Age were rarely made of one steel billet only. The blacksmiths used forge welding to join the pieces together. In forge welding, the pieces to be joined were heated until they glowed white (temperature around 1,100-1,300oC). The white-hot steel was hammered together on the anvil to form a weld joint.

In the Viking Age forge welding, quartz sand was used to protect the surface of the parts to be welded from the adverse effects of air. Moilanen uses borax instead, as its melting point is significantly lower than with quartz sand.

Moilanen lifts the pieces to be welded on the anvil and hits them with a hammer. This creates a weld joint. Moilanen does not wear gloves when forge welding large pieces, as the gloves prevent the blacksmith to perfectly feel the piece to be welded. From one piece of steel, Moilanen forges the shape of a sword in about two hours. Significantly more time is consumed when using patterned steel.

Viking-era blacksmiths coated the blade parts of the swords, or the entire sword, with carbon-rich steel to be able to temper the finished sword. The low-carbon core of the sword provided flexibility, while the tempered steel on the surface improved durability.